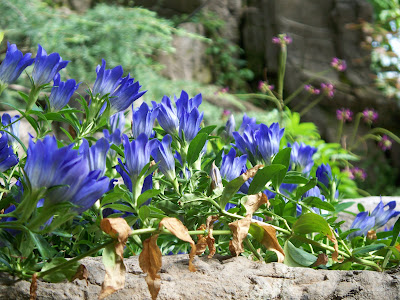 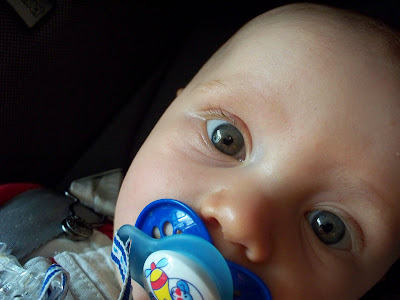 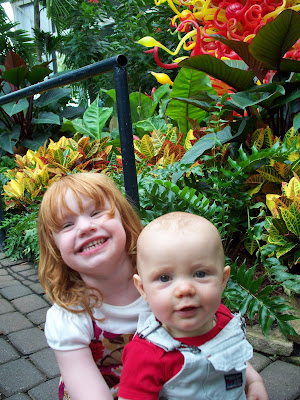 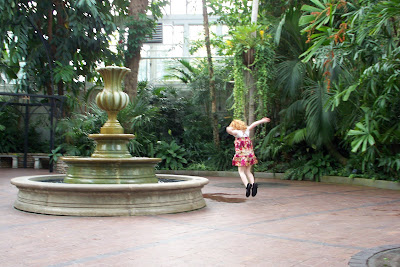 She is not too sick to jump in puddles! We went to the conservatory b/c there aren't many kids there ever, and even if there are, they don't interact too much.

Moira got sick sunday night coming back from Cedar Point. Just a cold consisting of a low grade fever, runny nose and cough. Not toooooo bad, hasn't really slowed her down so much but she had missed school all week. I am pretty sure this hurts me more than it hurts her. Hopefully she'll be able to go to her friday storytime class. Chris, Grady and I are now getting it. Hopefully the baby won't get it so bad. Nothing worse than a sick baby. The babies don't know how to blow their noses.
Blogger has been so slow with uploading pictures lately. It is very frustrating! I can put them on facebook much faster. So if you would like more frequent pictures, sign up for facebook and friend me. Come on, everybody's doing it :) Like now, I've been waiting 5 minutes for 5 pictures to upload, and I uploaded like 15 on facebook in about 30 seconds. I don't have time for this!
Here is a cute story while I am waiting. Today Moira said "I think I'll go up to my room, put on a princess dress and wait for a handsome prince to drive to our house in his car and honk for me".
Grady has been sleeping pretty well. I realized that if I feed him when he gets up sometime between 4:30am and 6 am he'll go back down for a couple of hours, so that is good. He's been sleeping solid from 7:30ish until then every night for the most part since we let him cry it out. He still fights me a bit sometimes when I put him down, but usually he's right out! He is a rolling machine. Chris thinks he is close to crawling but I am not so sure. He can get whereever he wants by rolling. I still think it will be another month or so. He is such a good happy happy guy. He is eating a lot of finger foods. He pretty much loves any food you give him. He has 2 top teeth through on his left side and is working on the two on the right.
Moira is still being increadibly picky about her clothes. She will only wear dresses with shirts underneath them. Short sleve shirts. No pants. But, this changes from week to week. Hopefully she'll get some use out of her 4 billion long sleeve shirts and 60 pairs of pants.
Posted by Meg Hogan at 6:07 PM