Air Show Meltdown and Grady on the swing pics 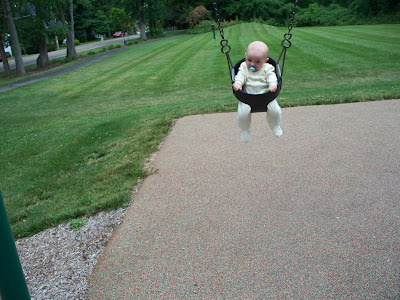 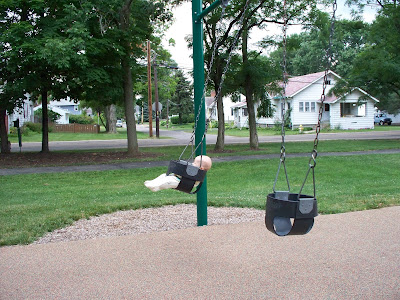 cutie pie in a swing 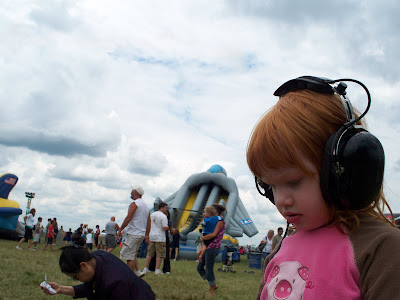 At the air show before the meltdown (see below) 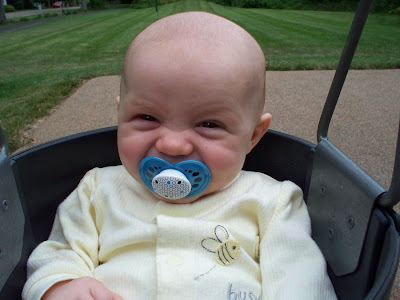 AT the park on the swing. It's nice that he's big enough to do the swings at the park now. Something else to so other than sit in the stroller or have me carry him around. 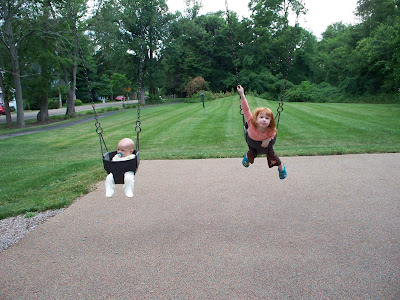 Moira didn't want to be in the "baby swings" but I put her in for a size comparison. 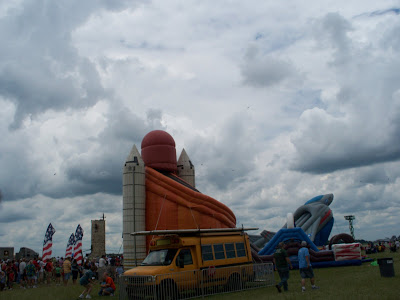 This big orange bouncer is what Moi was in when the really really loud airplane few by. 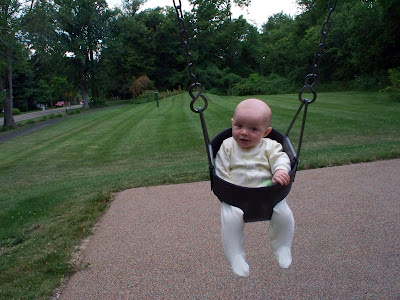 So we went to the Dayton Air Show on Sunday. Chris loves air shows and airplanes. We knew it was a risk b/c Moi has "It's too loud!" issues. We asked her if she wanted to go and warned her it would be loud. She said she did. Chris got out his nascar sound muffling head phones and showed them to her. They work really well, so it seemed like a good plan. We got down there without any problem. Grady slept the whole way and Moi was good. We had to park far away and take a shuttle. Moi liked going on a big bus ride. We got there and some guy gave us free tickets. He had extra- he said "courtesy of Pepsi" so I guess they were a sponsor. That was great b/c they were $19 each! Then we got in and it was a little loud from the announcer. Moi went back and fourth between wanting to wear the headphones or not. We found a kids area with about 6 or 7 HUGE bouncy things. Moi LOVES bouncy things. The only bad thing was these were HUGE and they had mazes, which made me nervous she would get lost in them and freak (like she did at kingdom of bounce) but I am trying not to be too overprotective and she said she wanted to do them. I had to feed Grady. Okay, Air Show ranks as world's WORST place to breastfeed. Seriously there was NOWHERE good. So, I busted out my reserve bottle of formula I carry in my bag. But I had no water. I asked the guy selling tickets to the bouncy things if I could buy a bottle from him and he just gave one to me (that was nice of him). Grady actually drank an ounce or two of cold Enfamil (notable b/c he had only been drinking soy up to this point) in the middle of a LOUD field. Then, all of the sudden this really loud-REALLY LOUD- F-18 Hornet came buzzing by. Okay, the really really bad part about this was Moira was in the middle of a humungo bouncy house. I was feeding Grady and pardon the language but I knew Moi was in a bouncy house and it was seriously soooooo loud, even the grownups were covering their ears, I was like S$#@!!! Anyone who knows Moira KNOWS how much she would totally be freaking out to be in the middle of a bouncy house when a noise that sounds like sounds like the world is coming to an end and her not really knowing where she is. HORRIBLE. We left carrying her out, well, Chris was, having a complete meltdown. And the worst was it kept buzzing by over and over. I've never seen her so upset in my life ever, including stitches incident. Pretty much the worst trip ever, buy hey, at least the family was together and I'm sure it will be a memory we will never forget, so that's something at least. Oy.

Grady is funny. He can really manipulate his pacifier. Sometimes when he is done eating I put like 5 of them on his tray table and watch him work them into his mouth. Also, I hold one in my hand while I am feeding him and let him know it's there and when he is done eating he takes it and put it in his mouth, to indicate "I am done eating, just want to suck now". Smart! Also, something so sweet is when he is eating, he hold my free hand with his hand and rubs his other hand up and down with his other hand. And then when I pick him up and pat him to burp, he also pats me on the back (Insert awwwwwww here). When he is sleeping or trying to sleep, all I need to do is go in and hold his hand- he reaches for my hand right away and grabs in and loves to hold it. It's so sweet.
Posted by Meg Hogan at 5:26 PM