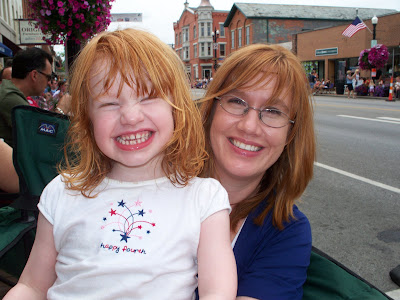 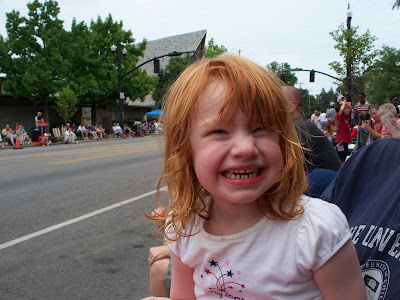 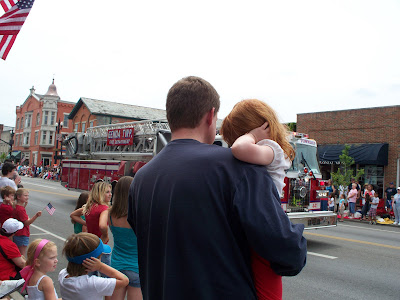 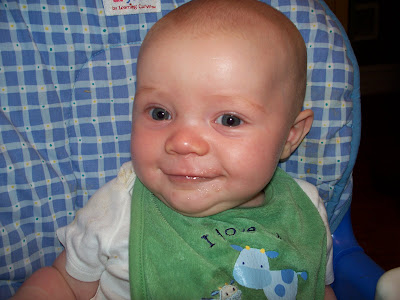 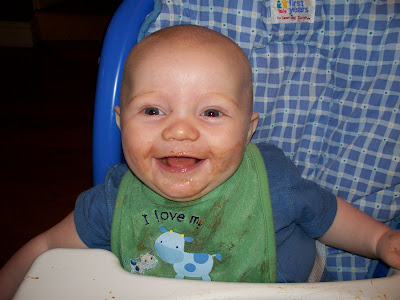 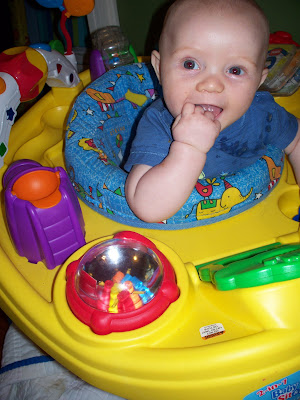 Grady likes looking at himself in this mirror 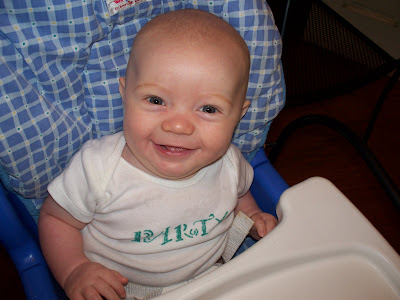 The other day, Moira went upstairs to get some pants. She didn't come down very fast, so I went up after a little while to see what was going on. She had emptied out all 3 drawers of pants onto the floor. There was one big pile with about 3/4 of her pants in it and another with the rest Here is how our conversation went:
Me: Moira! Why are all your pants on the floor???
Moi: I put them in a "keep it" pile and a "sell it" pile!
Me: What?
Moi: See, these pants (pointing to the keep it pile) I really like and want to keep, and these pants (pointing to the sell it pile) I don't really need anymore. See these ones are too tight and don't feel good. But they are orange and orange is a boy color, so how about we don't sell them and we save them for Grady? I will fold them and you can put them in his drawer. And I don't have anything to match this skirt, so we can sell it.
She went on and on with why all the items were in the sell it pile. It was so hilarious!
In Grady news, I was holding him in one hand and his pacifier in the other hand and he swiped it out of my hand and put it right in his mouth. It was very cute. Sometimes I put him in his booster seat with a bunch of pacifiers in front of him and let him try to get them in his mouth. Sometimes he does. He didn't like ham the other night (strained baby ham) so I think he's just not a meat guy yet. All the fruits and veggies he likes.
We had a good "America's Birthday". As some of you might remember, Moira was soooo excited about the 4th of July! We actually made our flag cake a few days early on her prompting. I am bummed, I accidentally deleted all of the pics of the cake along with a video of her saying "I Love you b/c you give me cake". Chris took Moi to the rides part of the zoo on Saturday. That is their thing. She'll probably never see another animal again now that she knows they have rides. Then we went to the parade that she quickly declared "too loud" but we convinced her that the loud part was only at the begininning which fortunately it was. Then she took a big nap in the car and at night, Chris took her to the Westerville fireworks. Grady had a fussy day so I didn't want to wake him up for them. She had so much fun! WE had DVR'd Red White and Boom (the downtown Columbus fireworks) from the night before and we watched that about 20 times in the morning. When she got to the Westerville fireworks there was no music so she started singing and made her own music!
Did I mention Moi can push herself on the swings now? Oh, and Grady slept 10 hours last night. 8pm-6 am! That's the best in awhile. Keep your fingers crossed he keeps it up.
Sunday my parents came up to get Moi to take her to Portsmouth for a few days so I can start baby proofing and move some of her toys to her room. It was been weird without her! They will be back soon, and Grady is up, so that's all for now!
Posted by Meg Hogan at 11:27 AM