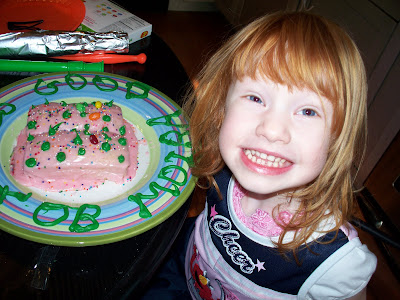 Is there a support group for kids who give up their pacifiers?
I gave Moira a warning last Monday that on Friday the Nuk/Binky fairy WOULD be coming to take away her one last Nuk. She actually reminded me on Friday that it was time. I decided to be swift about it and we put it in a box and wrapped it up. Back up, I actually cut it into two pieces and put it in the box first. She had a little panic attack when I did this and went to her bed and quietly sobbed. I told her the binky fairy couldn't fit it in her pocket without it in pieces. Then we wrapped it up. She decided she would suck on a cup of water at night if she needed something to suck on. She went to bed fine, actually. The problem was she got up at 3 am and was scared about something and spent about 3 hours on and off crying about the scary thing (snakes coming into her room). We knew it was going to be a bad night. But, the binky fairy produced a cake the next morning and a whole bin of stuff that lucky Moira didn't realize was left over from her stocking, easter basket, valentines day stash (b/c I didn't have time to go to the store and get new stuff...) And we went to Kinds Island (which we were going to do anyway) to celebrate the next day. She hasn't asked for it once!
Posted by Meg Hogan at 6:38 PM