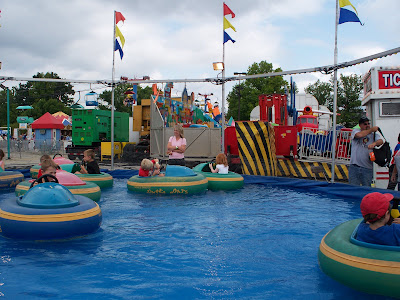 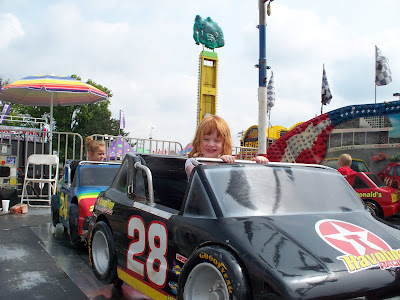 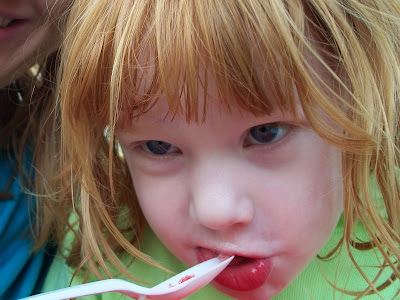 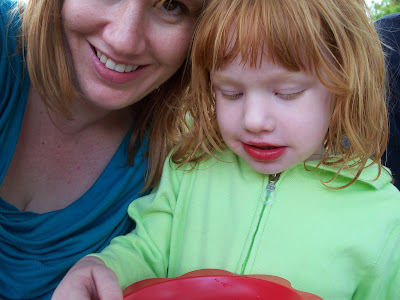 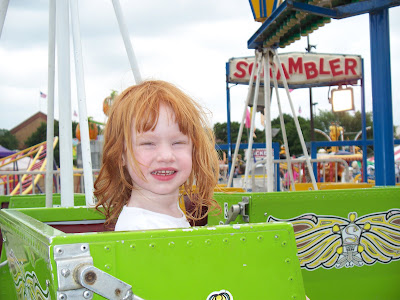 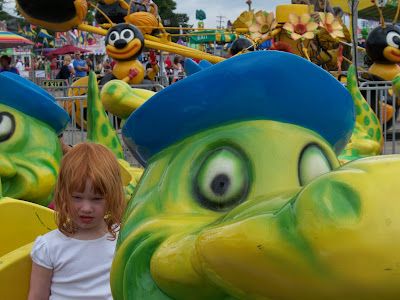 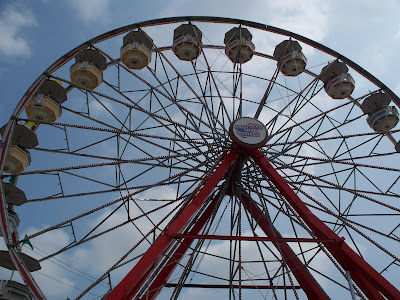 Moira and Chris are up there somewhere. 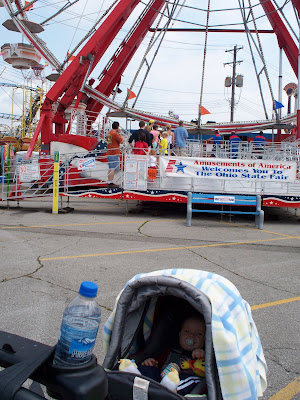 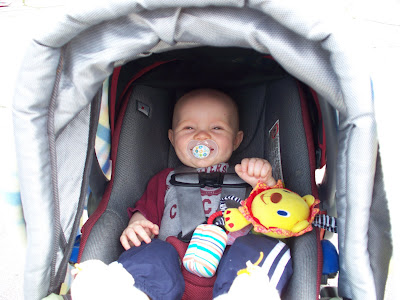 Grady is always so happy in his stroller. 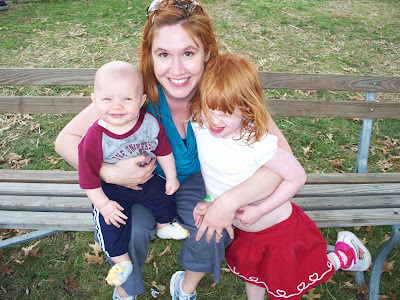 Look, no glasses! I got contacts that actually seem to be working (I've tried 2 times before with no luck). 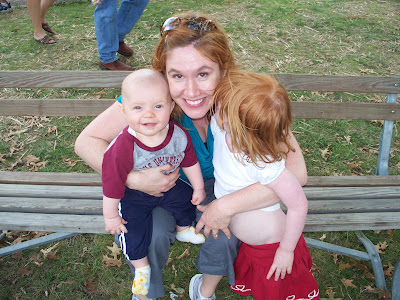 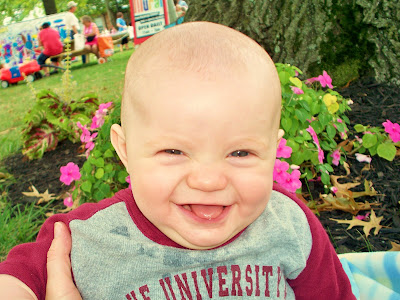 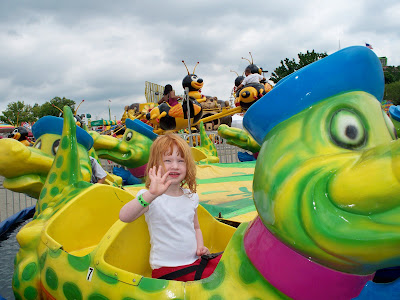 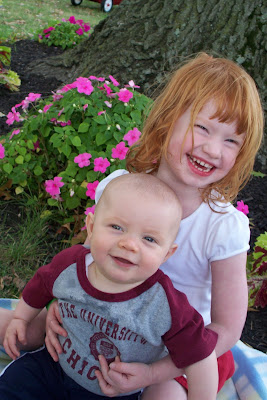 We had a very enjoyable trip to the State Fair on Sunday. Chris actually didn't have to work any this weekend which was awesome! Moi has been a bit under the weather, but she seemed okay so we decided to go ahead and go. We took the double stroller so she wouldn't have to walk as much, and that was great. We left here at 9:15 and stopped by Kroger to get discounted tickets ($6 as opposed to $10). We got to the fair right as it was opening at 10, which was nice b/c it wasn't very crowded at all. We went to the kids rides first. Moira got an "all you can ride" bracelet and we got 10 tickets for Chris and I, as some of them she needs an adult to go with her. She and I rode a couple of small roller coasters. Chris and I would have preferred that he do them but he was too tall for them. Then she did some by herself. She was in a very serious mood. She was having a good time but not really smiling. She has been kind of out of it with this cold or whatever she has. After about an hour and 1/2, we went into a building that was air conditioned and they had food stands. We got a table and I had some corn on the cob, Chris had a burger, and we ordered Moi some mac & cheese but she didn't want it, but she did eat the pb&j I brought for her. Then she and Chris went to the M&M's tent and got free samples of m&m's ice cream cones and I gave Grady some applesauce and rice. Then Chris and Moi rode the enormous ferris wheel. Grady took a nap at this point, which was nice. Then more kiddie rides. After that, we stopped at a bench and I gave Grady a bottle (there wasn't anyplace prive to breastfeed). He likes the Similac Soy formula so that's what we've been going with. He only has a few bottles a week. He gulped it all down and had a big poo while Chris and Moi went to the mural painting area. Then more rides and a few games, topped off by a trip to the bulk candy tent and home.

I think the coolest thing about the trip was that it went so well and we were out for 4 1/2 hours! That's a long time with a 5 months old, I think. He took 2 naps in his stroller and had lunch and a bottle out and was happy the whole time! Moi was also a champ. It was kind of touching, she hurt herself getting out of one of the rides but instead of whining and milking it, she tried not to cry and said "I'm okay" and hid her head under Grady's stroller awning and tried not to cry!


Grady is full on rolling back and fourth both ways. I put him down and he'll be like 5 feet away when I take a second look. My life just got that much more complicated. He can sit up by himself very very well too. He has been sleeping much better. I've started putting him down on his belly and he seems to like that (he can roll both ways so the Dr. said it's fine). He's been sleeping consistently from 7pm-4 am. He can't seem to get back to sleep well at 4 am, so he usually ends up in the bed with me so I can sooth him, etc. I am too tired at that point to think about what to do and I just want the crying to stop. Tonight I might try to change his diaper and give him some gas drops before I feed him and see if that helps. We'll see if I have the energy at 4 am.


Last week Grandma Russell came to visit for 4 days! That was very nice! Moira wants nothing to do with me when Grandma is around. She thinks of things for me to do so I will leave them alone. She'll say "Make me some mac & cheese" or "Grady needs a diaper change". She likes Grandma all to herself. Fine by me! We took both kids to see a movie. The theater in Worthington does $3 kids movies on Wednesday mornings so we gave it a try. Kung Fu Panda was on. It was a bit to action packed but Moi did well. Grady slept for the first 20 minutes. Not sure how as it was super loud. Moi wanted to go after like 1/2 an hour which was fine. I was worried it would get scary and I didn't want her to have nightmares. This was her first movie! And I guess Grady's first movie too!

We took both kids to the Westerville Community Center Pool on Thursday. Moi had a blast. Grady seemed to really like it too. He was kicking all around. I got this water carrier thing at the baby bargains sale. I think it was good b/c it kept him nice and warm and snugly on me. This was his first time in the pool.
Posted by Meg Hogan at 5:29 PM