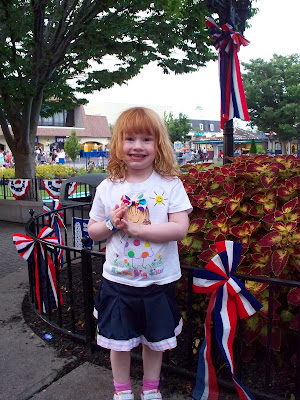 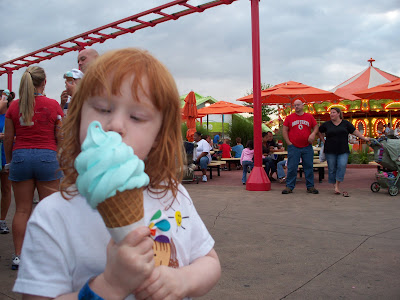 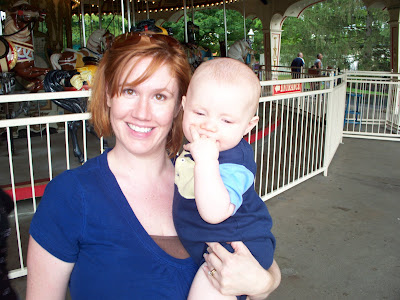 Me and Grady after his first ride ever. The Grand Carousel. We sat on the carriage next to another mom and baby. He kept trying to pat her arm but then the baby tried to take his Mam and he did NOT like that. It was kind of funny. 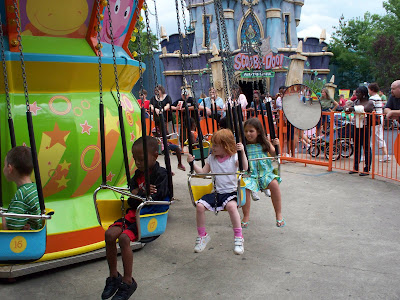 Moira on the kind of lame swings. 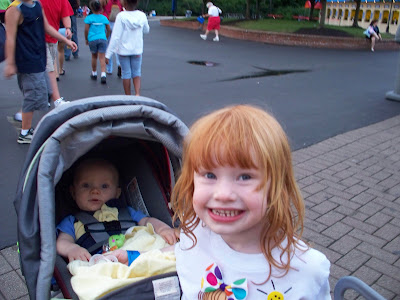 We had a good trip to Kings Island last Saturday. It started off a little rough. We went to CVS to get some bottled water and Grady pooed his pants so much that it was all out of his outfit, all over the car seat. We didn't want to use up our one and only extra outfit so we had to swing back home and get another one. When we got to Kings Island, all Moira wanted to do was the water stuff, so she changed into her bathing suit, but when she saw the water stuff, it was not what she pictured and was too scary. So she and Chris went on the water log ride and it got her all wet and she flipped out. But, after that it was all uphill. She ended up doing some kiddie rides and then was ready for the medium size kiddie rides. Then we headed over to the scrambler and the spider ride. We made a stop at the Grand carousel where Grady did his first ride. We sat next to a lady and her 13 month old baby and he kept trying to touch the baby and she tried to grab his Mam and he didn't like that. It was funny. He was a very good baby in his seat most of the time, other than 2 further poop explosionsm. We stayed until 8ish, which was a very long outing for us. Oh, I almost forgot. I was in the breastfeeding room, Chris and Moi came running in b/c she peed her pants in line for Scooby Doo. But, I had an extra outfit and it turned out fine. We finally left as it was getting chilly/dark. Moi fell asleep in the car on the way home. Grady didn't. I sat next to him making him laugh the whole time. Moi was so tired when we got home that she passed out on the floor of the living room. She has never done THAT before.
Posted by Meg Hogan at 6:43 PM