"The Most Special Thing Ever" 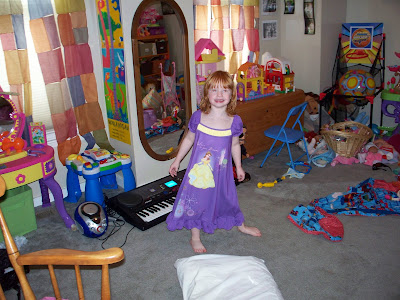 We went to the mall Thursday. It was a rainy day and I needed some new makeup from Sephora. We almost made it out w/o a purchace for Moira until she spied the Disney Store. and it was all over from there. She talked me into this princess night gown, saying it was "the most special thing ever". I got it a size 5/6 so she can wear it for a few years. She freaked out today when she saw it in the laundry room saying I can never wash it b/c it is "too special". She wanted to wear it to school on Friday but I was able to talk her out of it w/o much of a fit. She just wanted to tell everyone about it. She claims all the kids were VERY excited to hear about it. I could hear her talking about it as I left the classroom. She actually asked me to take this pictures, even though she's been protesting pictures as of late. Friday was her last day of school. Of course, on the last day of school she was dancing around saying how excited she was to go to school. We were in charge of last day of school party cupcakes. It ended up being a disaster. They took twice as long to make b/c Moira wanted to help ice and frost them. Then I dropped the cupcake carrier upside down on the walk to school. I spent 1/2 an hour in the breakroom trying to fix them and came back early with extra sprinkles to make them even better. I would have just got new ones but Moira would have busted me. Then, right after the kids sang their songs, all the parents and kids busted out of the room, nobody stayed for the party but 2 kids! I was like, oh great, I spent all that time for nothing. One really nice dad made a big deal about the cupcakes and said thank you like 5 times. That was nice. I don't know what the deal was, but I was sad all our hard work was for nothing! But I digress...
Grady is still a good sleeper at night! I tried taking him out of the fisher price cradle rocker and it was back to 5 hours, so he is back in it for now and doing 10 hours again. He's been going to sleep at 7pm, not waking until 5 am (sometimes I have to put the paci in around 3 or 4) and then going back down for another hour or two!!!! Can you believe it? We'll take it while we can get it, I know babies sleep schedules are ever changing, but as of now, not to bad at all.
Grady had the most gigantic poop expostion EVER today. It was even on his shoulders, no lie. Chris was putting him to bed and rocking him to sleep and then realized he had poop oozing out everywhere. It just made me laugh. Chris was thanking his lucky starts that I was there to help deal with it. We ended up getting him completely undressed and I jumped in the shower with him. It was bad.

Moira has an imaginary friend as of today. Her name is Alison. She was arguing with Alison about who is more of a pirate. Aye matey!
Here is the Moira quote of the day: "I can't wait to go to Planet Earth!"
Posted by Meg Hogan at 4:53 PM