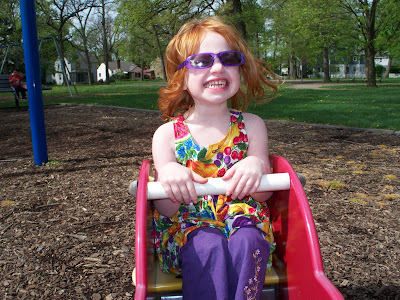 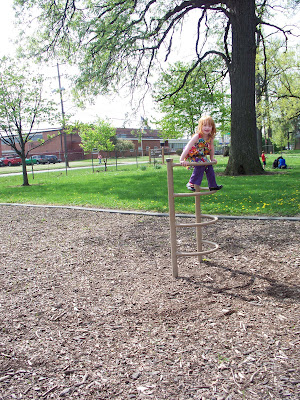 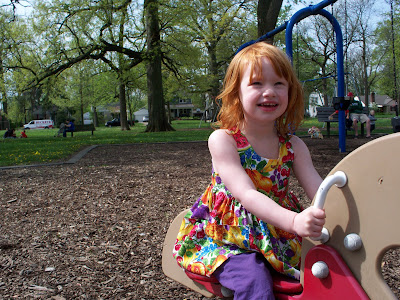 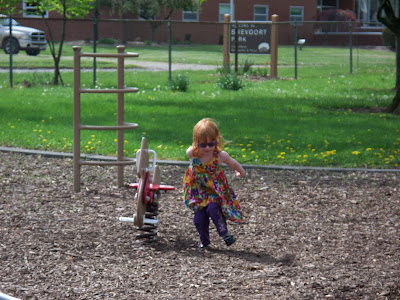 Playing at the Park 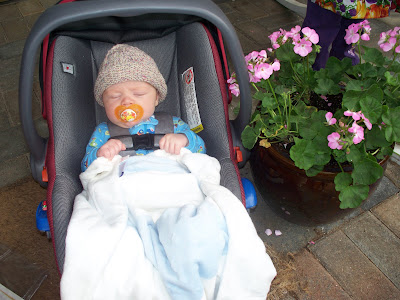 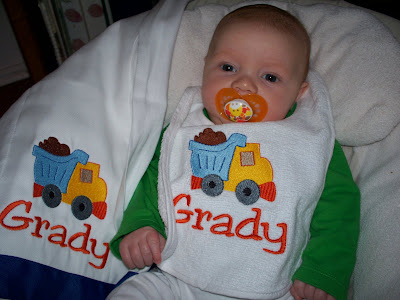 My old friend Jennie Brown Crawford sent these to Grady in the mail. How cute! 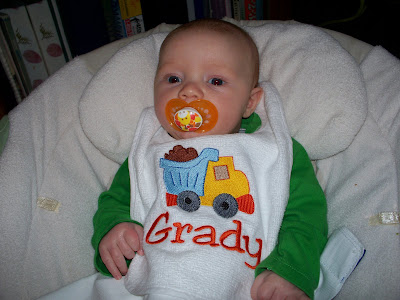 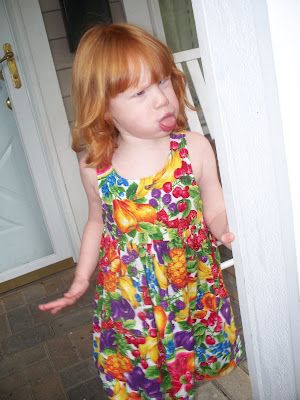 Sorry, I've been MIA. Busy busy around here. Facebook is sooo much faster and easier, so I usually update that and then don't feel like doing it again on blog. Plus, I feel like I have to say something of importance here, and it's hard to make sense of all my thoughts these days.

Grady slept from 7pm until 5:30 am last night! That's 10 1/2 hours people! I wonder if it was a fluke. We'll see. Only time will tell. He's such a goooooood baby. So happy, chill, good eater, good sleeper. Exactly what I always say on baby cards to people that I hope their baby will be. He has started laughing too. It's kind of just like "ha ha ha" in a dry way, but it is definitely a laugh. He's kind of batting at things. He can grab things and get them in his mouth, although I don't think he's necessarily trying to. He eats his hand a lot, but he's definitely a paci man. He loves the MAM brand paci's, doesn't like the NUK's anymore. (Moira has claimed them all saying Grady doesn't need them anymore) He can kick really hard, almost kicked himself out of his bouncy seat tonight! He isn't overly entertained by Moira yet. She gets in his face and says things she thinks are funny, but it's mainly really loud obnoxious gibberish. He just looks at her like "stop bothering me".

Moira. Where to begin. Going through lots of things these days that I hope/assume are phases and related to the new baby. She's been VERY attached to me. VERY. I tried to go to the bathroom at a friend's house- I told her I was going, she said she didn't want to go with me, but I soon as I was out of sight she had a complete meltdown. She even does that when I leave her with Chris sometimes. Also, very passive aggressively trying to bother me/Grady when I am trying to get him to sleep. Mainly yelling loud gibberish or playing her instruments really too loud. She doesn't want much to do with any other adults. Which, for the record, how come some people do not get it when a kid CLEARLY doesn't want to talk to you. She will be hiding literally behind me and some people just keep getting in her face, which makes her freak out more and more. I finally had to tell the hygenist at the dentist office SHE DOESN'T WANT TO TALK TO YOU. I was already annoyed at them, so I had no problem being borderline rude to the lady. I asked the teachers at his school if she ever talks to them and they said she'll respond if they ask her questions but very quietly and never initiates conversation. But I guess this is the way she's always been at school. Chris hid under the table for 2 years in preschool just saying "macaroni and cheese" to anyone who tried to talk to him, so at least she's out from under the table! She did, ironically, hide under the table for a few weeks. It's good to know she comes by it naturally. I guess she gets that from him and throwing things when she's mad from me... Ah the best of both worlds. But, if she is also getting the valedictorian gene from both sides, so she's got that going for her. I am trying to get her in some summer camps to help with the separation anxiety, and I've put an add in the Otterbein student job placement office for a part time babysitter. Some of my friends with kids said they'd help and take her for awhile over the summer just for an hour or two here and there so she gets used to me leaving her. So we have a plan.
Poor second kid and safety. I busted Moi with a handful of hand sanitizer and she was getting ready to "clean" his face with it. That could have been bad. I hid the hand sanitizer, no worries. I also asked her to clean his paci, and she got soap all over it and fortunately told me "I didn't rinse it very well" before I put it in his mouth, b/c it was still covered in soap. She head butted him the other day really hard. He didn't even cry though. I told her that was very bad and she could really hurt him and she said "I'm sorry" and gave him a kiss on the head. It was such a genuine "I'm sorry", it brought tears to my eyes. Usually when she gets reprimanded she goes "don't see me!" and runs and hides, but she actually felt bad!
Funny Conversations:
Right before bed, Moi was looking at me and started patting down my hair and said "Mommy, you hair looks disgusting".
Me: Moi, what did you learn at school?
Moi: Goose poop is disgusting!
Moi: Grady is bald just like Pop Pop!
Moi: Who is going to stay with me when you go go the hospital to have your girl baby?
Me: I'm not having anymore babies.
Moi: Why not.
Me: We are just a two kid family.
Moi: Well, we are only a ONE kid family, so where is Grady going to go?
I can't think of everything else I wanted to say, so I will end here. I am being cocky and staying up AFTER Grady and Moi go do bed. Hopefully he'll be a good boy tonight and have a good sleep.
Oh, that reminds me of the other thing. Moi has been FREAKING about bugs. It's going to be a long summer. She got up in the middle of the night hysterical b/c she thought she saw a fly. she was screaming and crying. Chris listens to her monitor b/c usually she goes to bed whenever and we don't hear from her at all all night. But she was up from 1-4 am really upset and in his bed watching tv until he put her back to sleep. Crazy girl.
Posted by Meg Hogan at 4:43 PM