Easton to see the Easter Bunny & the Witching Hour begins. 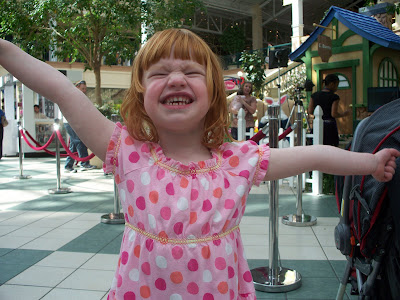 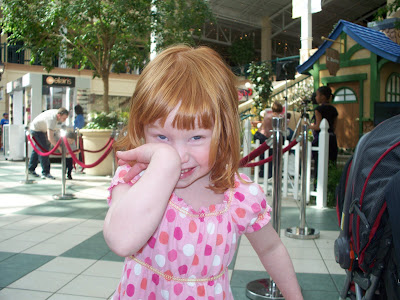 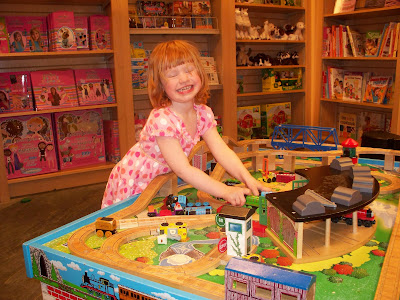 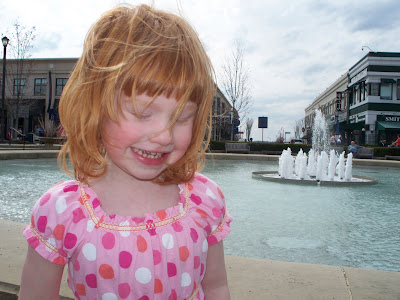 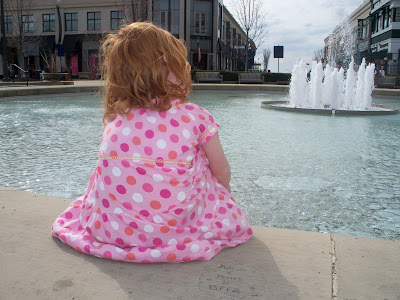 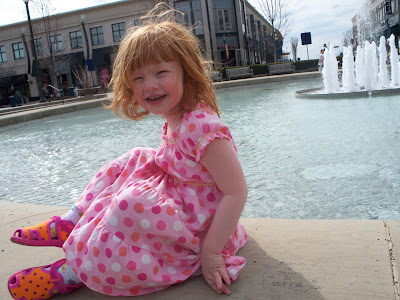 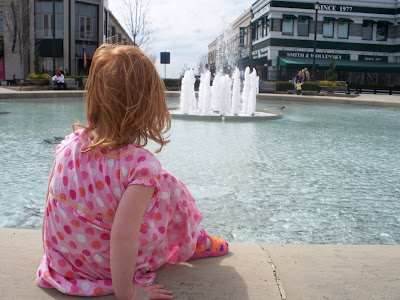 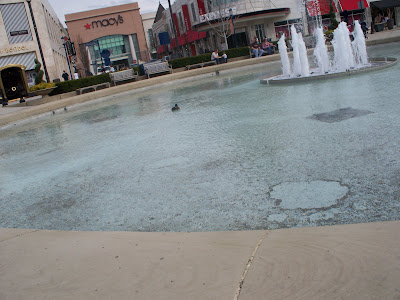 We went to Easton Thursday to see the Easter bunny. A friend called to say they were going out there and we missed the call. I told Moira about it and she said she wanted to go right away. We weren't doing anything so I figured it would be a good way to spend some time in the afternoon.

This was as close as Moira would get to the bunny. Not surprising. However she did shout to him multiple times that she would like 6 Easter eggs. She seems to think he is like Santa, she keeps listing off the things she wants him to bring. We were going to get her a clubhouse from Costco but we went today and they were all sold out. This happened to me last year too. I waited too long and they were all gone :( After going to see the bunny, we went to the fountain. Grady was good, he slept the whole time. Moi really wanted to take a picture of the duck with my camera. She is really good at taking pictures. She took one, noticed that the stroller was in the picture, and then went to get closer and would look at the display, etc.

I took Grady to the Dr. today. He has been fussing/screaming a lot and I noticed when he peed (on me) that he was screaming while he peed. The Dr. didn't think it is a uti, but we are testing his urine tomorrow. The Dr. said it's just probably "colic' which starts around this age. I was hoping we'd dodged that bullet... It hasn't been THAT bad, he's just had a hard time napping and getting back to sleep at night, waking up in screams of pain. He has also starting having a "witching hour" which is common with babies. I remember Moira would do it from like 7pm-10pm, which was exactly the hours when Chris would be home. He was like, this kid hates me! Grady's is a little earlier from about 4-7. I think b/c he needs another nap in there before bed, but I haven't been able to get him to take one. I probably could if I didn't have Moi to take care of too, but it's hard at that time b/c she is starting to get tired and needy, and she needs dinner, etc. And if I threw Grady in the car seat and drove around, he would sleep, but so would Moi, and that's BAD BAD BAD, b/c if she naps in the car, she won't go to bed at night. I tried walking them to the park in the stroller, and that's an option when weather is nice, but tricky b/c a couple of times, it didn't put him to sleep for long enough and he woke up SCREAMING at the park and I couldn't calm him down. I am still not overly comfortable (literally) breatfeeding at the park (the only thing I could think of that might stop him). I tried, it didn't work, so I had to convince Moi to leave the park earlier than she'd like. I did carry him around screaming for awhile, but it was as long as I could take it, and it wasn't very long. Let's just hope this is a short phase.
Posted by Meg Hogan at 6:01 PM